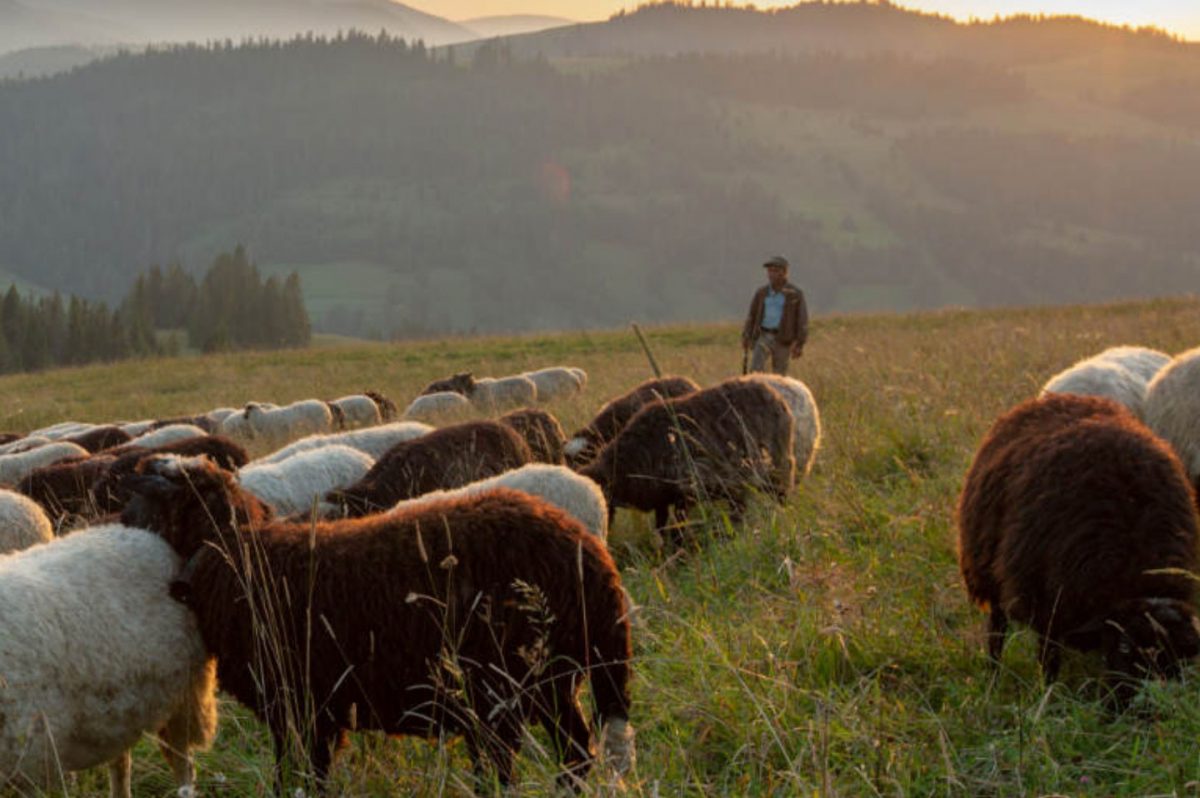 This is a guest post by Sarah Savory, sister to Rodger Savory, who spoke at Transform and daughter of Allan, the father of holistic management. She wrote it in Seth Itzkan’s soil4climate group, but it was going to vanish in the flow of Facebook Groups where great content that makes you stop and see something in a new way, as Sarah’s piece does here, is followed by a religious war between climate vegans and intensive grazing management folks. I thought her thoughts needed to be saved, so I asked and she consented, to send it to us to be put on site, and in our newsletter in a way people could point to them.  – Kevin Jones

Today I’m going to talk to you about baseball bats, chickens, painkillers, hospitals, space technology and presidents. Oh, and otters!

Every single environmental, social/cultural or economic problem we are faced with on our planet today is a symptom of our reductionist management.

The exciting thing about this is that it means we don’t actually have the thousands and thousands of separate and daunting issues we think we do. Those issues are just symptoms, so if we just address and change one thing (our management) the symptoms will automatically fall away (some of those are: droughts, floods, poverty, poaching, biodiversity loss, mass extinctions, social breakdown, wildfires, violence, mass emigration to cities, desertification and climate change.)

We are all running around like chickens with our heads cut off in a panic, trying to treat these ever increasing symptoms, while fighting and arguing about who is coming up with the best practices or solutions, some of which would be great, except we are continuing to blindly use the same old archaic management.

Here is a perfect analogy of what we are doing to ourselves:
Imagine that one day, someone starts to beat you really hard over the head, once a day, every day, with a baseball bat. It really hurts, and instead of trying to take the bat away, you just take a dispirin to deal with the headache it causes and carry on.

After a week, the pain will get worse and the dispirin will no longer be enough, so you start taking a stronger painkiller. The beating continues.
After a month or two, the stronger painkillers won’t be enough anymore, so you change to something even stronger. The blows continue.
Then, because you’ve taken so many painkillers, your body starts to struggle and you begin to get other symptoms which are being caused by all the medication, so you start to take new medications to try to deal with those. Yet the blows to the head continue.

The pain is excruciating, so you need even stronger drugs. Then your organs start struggling from all the medication and you end up in hospital with very serious complications. The doctors rush around trying to treat all your worsening, and now life-threatening, symptoms. Everyone is so focused on your symptoms that nobody has even looked up and seen the person standing next to you with a bloody great baseball bat.

It sounds stupid, doesn’t it? Of course. But that is EXACTLY what we are doing to our planet. Our planet is in that hospital with life threatening complications that everybody is rushing around administering painkillers for, but nobody has looked up and seen the guy with the bat.

We have to get people to look up and see what’s causing it all and we have to urgently take that baseball bat away!

Holistic Management does that for us.

I’m going to use a story about otters to show you how vital it is for us to evolve from our automatic, reductionist management (taking painkillers) to a new way of making decisions that will change our entire future (take the bat away.)

So many people get offended when the term reductionist management is used…it actually shouldn’t be offensive at all, but should, without question, be changed:

ALL tool using animals (including us) automatically use a genetically embedded management framework…and every single management decision made is in order to meet an objective, a need, or to address a problem. And the reason we manage, or make those kinds of decisions every day is to improve our lives and/or the lives of others. And those decisions are made with exactly the same thought process and for exactly the same reasons, whether we are an otter, or the President of a country:
A hungry otter has an objective: he wants to break open a clamshell because he needs to eat. He uses a simple tool (technology, in the form of a stone) to do so. He does this based on past experience or what he learned from his mother.

Or, the president of the USA has an objective: to put a man on the moon within a decade. He and his team use the same tool (technology, but various and more sophisticated forms of it) and base their choices on research and expert advice, past experience, cost and so on. It’s the same process, or framework, in both cases, only the degree of sophistication varies.
In the case of humans, in the beginning, this genetically embedded framework wasn’t reductionist. It worked perfectly well for us for centuries.

Until our technology advanced. (This is when the person with the baseball bat first appeared.)

In the last 400 years, our knowledge, and the technological power to respond to any challenge, have increased more rapidly than in all of the two hundred thousand or so years of modern human existence. Over those same few centuries, the health of our planet has entered a breathtaking decline.

The parallel is no coincidence.

To this day, this embedded decision making process works perfectly well for the otter. But imagine that the otter suddenly invents a machine that can crack open 5,000 clam shells in a day and that all the other otters suddenly stop doing what otters are designed to do and instead, just come to him to get their clams every day. Just that tiny advance in technology (even though at the time it would have all the otters thinking that their lives were vastly improved) would have inadvertently set off an inadvertent and complex chain reaction right through the whole ecosystem. You’d soon see a catastrophic environmental knock-on effect because the balance and flow of the ecosystem has been upset – all the otters are suddenly behaving unnaturally, there are also far too many clams being opened everyday and all sorts of problems are beginning to be observed. (The beating with the baseball bat has started.) Over time, the entire ecosystem will keep trying to adjust to this change (take painkillers) but eventually, it will start to collapse.

This is exactly what happened when our technology advanced: we were so focused on it that we began to ignore the fact that we were still a vital part of the ecosystem. (This is when the beating started.) Our management should have advanced at the same time and adjusted to accommodate for this change. But it didn’t. (We took painkillers.) While there have been thousands of books written over the years on different types of management, if you dig a little deeper and ‘peel the onion’ the same genetically embedded framework is still inadvertently being used. (Stronger painkillers but still not taking away the bat.)

Now, you can begin to understand on a micro level how the otter story is just the tip of the iceberg when it comes to explaining how we’ve arrived at the catastrophic state the natural world is in today.
Imagine the otters took it a step further and started having to pay money for the clams. Now, with every decision the otters make, in order to make sure their ecosystem doesn’t collapse, they would need to be simultaneously addressing the social, environmental and economic aspects of their actions. (Complications from all the beating and painkillers.)

Our natural world is rapidly collapsing all around us because our management has never once been adjusted to respect nature’s unavoidable web of social/cultural, environmental and economic complexity. (We are constantly treating the symptoms and complications we have created.)
Until now. (We’ve suddenly noticed the guy with the baseball bat!)
When my father discovered the genetically embedded framework that we all automatically use, he realized that if we were to ever cope with the inevitable and devastating knock on environmental effects caused by our monumental advance in technology, we would have to make an urgent plan.

(We had to stop the beating.)

That’s when he developed the Holistic Management Framework, which is so exciting as it allows us to successfully address complexity. It can be applied to any practice, individual life or business, and it simply ensures that our decisions are not only addressing the root cause of the problem but also making sure that our decisions are socially/culturally sound, economically viable and ecologically regenerative.

The good news is that we actually can get ourselves out of this disaster we’ve got ourselves into, and it’s not hard…we just have to adjust and evolve to using the simple but new and unique Holistic Management Framework, in order to ensure we are managing complexity.

This management framework can be applied to absolutely any practice, anywhere in the world and make it successful because the root cause is being addressed and complexity is being taken into account, which stops our decisions from causing unintended consequences further down the line. (It prevents the beating from ever starting in the first place.)
Treat the root cause of any problem (stop the blows) and ALL the symptoms will automatically start to fall away.